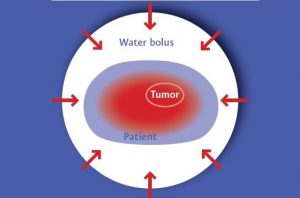 Both malignant and healthy tissues are heated uniformly on all sides. The temperature difference between the tumour cells and the surrounding healthy tissue is barely measurable. Even by focusing the heat locally. 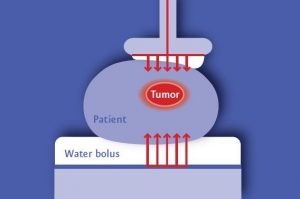 The electric field and the resulting heat are directly directed and focussed on the area of the malignant cells. In this way the temperature of the healthy tissue increases only very slightly. The effect is more localised and the benefits are much greater.

In oncothermia, the temperature can reach 42-43ºC without damaging healthy tissue or the skin. But it needs to reach a minimum of 38ºC for it to work at tumour level. In other words, at only 38ºC it is 45.9% more effective than conventional hyperthermia. And at 42ºC it is 57.1% more effective.

In a clinical trial of 306 breast cancer patients, 44% of patients received radiotherapy alone. While 56% opted for a combined treatment with Oncothermia. According to the results, it was found that with a temperature of 42.5-43ºC, and a number of sessions from 2 to 8, the improvement rose from 41% to 59% with Oncothermia.

On the other hand, in another clinical trial with patients with cervical cancer, total remission increased from 57% to 87%. In addition, 3-year survival increased from 37% to 51%.

After treatment with conventional oncological hyperthermia and oncothermia, the following percentage of malignant cells eliminated was observed.

Data based on actual results obtained clinically and scientifically.

In conclusion, Oncothermia treatment is based on two key effects: energy absorption and selection at the cellular level, both controlled by a modulated electric field that passes through the patient. In this way, the tumour becomes a constant and controllable parameter within a closed electrical circuit.

More information in the following link.