In which cases can Oncothermia be used?

Thanks to the combination of electric fields and heat, Oncothermia can be used in areas of the body in constant movement, such as the lung; or heat-sensitive regions, such as the brain; and even, it is effective in regions of the body with a high level of blood flow, such as the liver. The indications for treatment are described below.

Oncothermia can be used in all stages of cancer, although its main current use is with advanced solid tumors that are difficult to operate or inoperable, as well as with tumor recurrences and cases of metastasis.

Oncothermia, in general, is not used as a single therapy, in fact it has a greater effectiveness in combination with chemotherapy and / or radiotherapy, in those patients who respond positively to these treatments, enhancing their benefits and reducing side effects -leucopenia, mucositis , nausea, vomiting, etc. It is also beneficial in patients who reject chemotherapy or radiotherapy treatments, or who no longer have an effect due to tumor resistance. 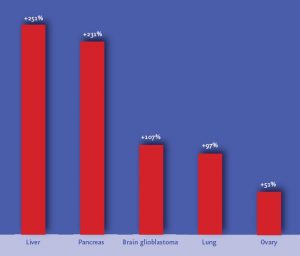 Oncothermia treatment for patients with inoperable rectal carcinoma. After treatment, 71% of the patients were operable: 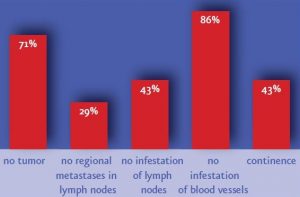 Custom treatment
The treatment is always specific for the patient. It allows an adapted program, which means that the method and the electric field are adjusted in a totally personalized way to the patient.

The treatment of Oncothermia is specifically ajusted to each patient, and can be combined with other conventional therapies in cancer treatment, such as radiotherapy and chemotherapy.

It is a non-invasive, non-toxic and effective method. It has no side effects or risks for the patient, because it only acts on the affected area. In very few cases, roughly 3%, a mild erythema (reddening of the skin) may occur in the treated area, but it is minimized, to a large extent, by monitoring the process.